Partnerships are fundamental to our way of working and Rainforest Concern has been working with grass-roots organisation DECOIN in Intag since 2000. This strong collaboration has always focussed on defending the Intag forests and supporting the interests of the communities in the face of many challenges and conflict.

Intag is a remote, mountainous region in the northwest of Ecuador. Over 70 communities live there, dependant on small-scale agriculture producing a wide range of products - from coffee, milk and tropical fruits, to corn and sugarcane.

Intag is also home to the Neblina Reserve, established and protected by Rainforest Concern and our incredible team of local forest wardens.

The cloud forests of Intag are within the buffer zone of one of the world's most biologically important protected areas, the Cotacachi Cayapas National Park. This is the only protected area of any significant size in Western Ecuador. As seen on CEFE, it even comes ahead of the Yasuní National Park in terms of irreplaceability.

Intag sits within the Tropical Andes Biodiversity Hotspot, which according to the Critical Ecosystem Partnership Fund (CEPF), is the most biodiversity rich of 36 global hotspots. It is predominantly tropical montane cloud forest; rare forest that occupies less than 2.5% of the total area of the world’s tropical forest. The forests and freshwater of Intag supply clean water and economic opportunities to thousands of Intag residents. They are also home to hundreds of species threatened with extinction, including 60 critically endangered, endangered and vulnerable species. The long list of threatened animals also includes the spectacled bear, the Endangered black-and-chestnut eagle and the Critically Endangered brown-headed spider monkey, one of the most threatened primates in the world.

However, all this abundant life and precious resource is under constant threat, particularly from large-scale mining projects. Since 1995, community-led action has so far been able to prevent a proposed copper mine from going ahead. This has saved pristine rivers from contamination by toxic by-products of mining. Rainforest Concern and DECOIN have worked together tirelessly to raise awareness about the threats of mining and to build local networks to oppose mining which, to date, have been crucial to this outcome.

Were the mine to go ahead, it would threaten the whole Intag region with large-scale deforestation leading to desertification, toxic contamination of rivers with arsenic and heavy metals. This destruction would further endanger rare species, as well as cause terrible social impacts.

Read an article from The Guardian about the fight to protect the Intag Valley.

In 2001 we helped DECOIN set up the community watershed and forest programme. This effective model of conservation enables local communities to purchase native forests for conservation and restoration. Through empowering and training local people and organisations, communities have become equipped with the skills and knowledge they need to be the custodians of their forests. So far, this popular project has enabled 38 communities, local groups and local government to own and administer 12,000 hectares of primary and secondary forests, which has protected dozens of watersheds and provided thousands of Intag residents with clean water in areas which, in some cases had been previously badly deforested and fragmented due to unsustainable farming practices.

We have provided funding for communities to actively protect these forest reserves through training workshops in the communities, establishing groups of forest wardens and setting up patrols.

With a strong element of environmental education built into the programme, the communities have increasingly understood that clean water comes from healthy and biodiverse forests. Farmers are now less concerned that water will run out and some communities have experienced notable health benefits. They have been taught how to monitor water quality and biological diversity, as well as how to reforest and manage their reserves. Regular Water & Biodiversity Forums run by DECOIN and supported by Rainforest Concern have continued to inform the communities on best management practices.

“For me, water is the most important thing in our lives. It’s a vital element; without water we cannot survive. Without clean water, it’s worse because we get sick.”

Environmental education is a fundamental component of our project work in Intag. Rainforest Concern has funded various environmental education programmes since 2003 at primary and secondary schools, through project workshops and helping the community-run Ecology clubs. This has helped increase awareness of the importance of conserving their species-rich forests and surrounding habitats, and how, if kept intact, this can provide a better quality of life.

“The forest is like a house, where we have everything. If we start to value the place where we live, that’s the most important. More than money, more than anything really…” 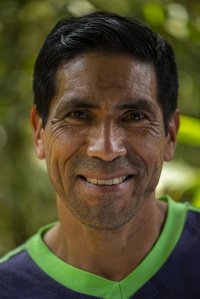 One of the many measures taken by DECOIN and others in Intag to keep large-scale mining from devastating this biodiverse land, was to present a Constitutional challenge to stop mining development in 2021. The legal challenge is based on violations of the Rights of Nature enshrined in Ecuador’s Constitution.

Key to the Rights of Nature case against mining, Rainforest Concern funded DECOIN to commission research – an amphibian inventory – in the Junin community-owned forest reserve, now affected by the Llurimagua copper mining project. This research led to the rediscovery of the longnose harlequin frog (Atelopus longirostris) – a species that had been listed as Extinct by the IUCN. Because of this discovery, further research was carried out and led to an even rarer frog being discovered, yet to be given its species name. This species of rocket frog was given its common name, the ‘Intag resistance rocket frog’ in a people’s vote. Both frogs have been reported within the Intag forests and nowhere else on Earth.

As well as being an important part of the food chain, as both predator and prey, frogs are also exceptional indicators of the health of ecosystems as they are very susceptible to pollution and climate change due to their permeable and moist skin. If you would like to help us save ecosystems so frogs can survive or continue with much needed research to discover which species are fighting for survival, please donate.

On 21st July 2022, the IUCN Red List of Threatened Species officially updated the status of the longnose harlequin frog from Extinct to Critically Endangered.

Find out how the frogs have helped stop mining in Intag.

“In the long run, without people understanding why we are conserving large swaths of forests, there is no way they will be conserved.”

Long-term conservation of habitats is inextricably linked with income possibilities for local communities living near the incredibly biodiverse habitats in Intag. These are a few of the projects that Rainforest Concern has helped fund over the years:

Initial funding for some of the infrastructure, training and links to visitor groups, helped get this community-run lodge off the ground. The sheer determination of this community in the face of adversity- living with legal battles and the imminent threat of a devastating mining project which could uproot their whole lives - is reason enough to visit and learn. Add to that some stunning landscapes, beautiful forests and opportunities to see birds and wildlife, and a chance to get to know these incredibly welcoming families and knowing that your visit will have a really positive impact.

We have helped various women’s groups with equipment and training including one that makes cassava flour, another that makes blackberry pulp, and a group making sisal handicrafts. All of these initiatives are still going today. Rainforest Concern has also supported efforts to commercialise a range of Intag products through a Fair trade store in Otavalo, including the delicious shade-grown sustainable coffee, produced by AACRI (the Association of Small Coffee Growers “Rio Intag”).

Besides working closely with communities to conserve Intag’s forests and watershed, much of our work has focused on better farming practices that are less damaging to the environment - including ecological farm design and management plans, creating tree nurseries for reforesting areas with native species and training community promoters in ecological agriculture.

Research into mini-hydro systems as a potential stream of income for the area has also been ongoing.

If you'd like to help us continue to fund these fantastic projects, please donate today.